It’s possible to create up to eighteen pre-populated fields and up to three custom questions. Since today it will be possible to collect leads in real-time.

Nobody likes filling out contact forms and that’s why Facebook released Lead Ads; the new advertising feature which makes mobile forms simple for people and more valuable for businesses like yours.

We think that lead generation is never gonna be the same again. We predict that this user-friendly concept of ‘tap, tap, done’ will increase your leads per campaign and lower your Cost Per Lead instantly.

Chances are users will exit the proces somewhere and are left behind with frustration and probably still looking for the solution of their unfulfilled needs. Facebook made an end to this inefficient multi step process by introducing Lead Ads. Lead Ads of Facebook is a serious promising new way of advertising and collecting warm leads.

New way: to generate leads in Facebook with Lead Ads

From the moment the users taps the “Submit” button you can start following up your new direct hot lead. Isn’t that amazing?

How does it work? 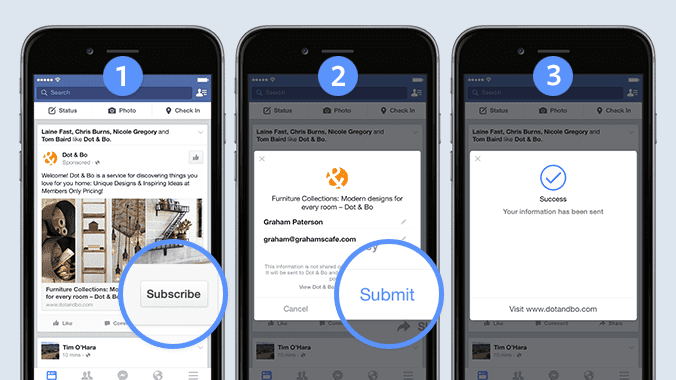 The Next Ad is always seeking for new possibilities to the get the most out of your campaigns. In our next blog we will go deeper into the possibilities of this new Lead Ads feature.