Optimising The Impact of Mobile Video Ads
Log In
All Posts

For many customers, mobile devices are becoming the preferred device when it comes to purchasing products online. In this current ‘smartphone era’ it is the only device that most people have on them at all times, no matter where or when. This has led to an increase in mobile-friendly content production, especially videos, as well as a strong rise in mobile e-commerce.

So, how can advertisers maximise the impact of mobile videos and what can be done to keep viewers watching, engaging and converting?

Mobile phones have become the primary device for viewing videos, with more than 75% of all online video views being watched on mobile phones. That is an extremely high and conclusive figure that has led advertisers to increase the production of videos that are especially suitable for mobile phone viewing. In fact, the number of users that mainly use their mobile phones to view videos is constantly increasing.

According to figures obtained by eMarketer, more than 2.02 billion users will primarily use their mobile to view digital videos, an increase on this year’s estimated figure of 1.87 billion by more than 9%. These mobile video viewers will, in 2019, likely represent over 80% of all digital video viewers. Even Google has decided to primarily take in mobile performances into account when evaluating the performance of a website. As can be seen in the image provided by eMarketer below, these figures are expected to continue rising, although the rate of increase will slow down. 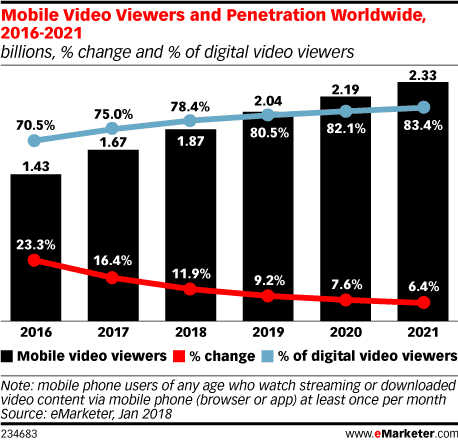 Now that we have an idea about the significance of mobile videos, we can start to focus on the ways in which advertisers can maximise the impact of their mobile advertising videos. Here’s a comprehensive list of some best practices that anyone creating a video suitable for mobile devices should keep in mind.

Did you know that research conducted by Facebook revealed that approximately 94% of people surveyed in the United States constantly have their phone at hand whilst watching TV? It’s a staggeringly convincing statistic that goes to show that the attention of viewers isn’t cheap. They’ll instantly switch off once you start losing their interest.

And when you consider that during TV ad breaks Facebook activity triples, it becomes increasingly evident that users can easily switch between platforms within seconds and their attention is no longer solely vested in one particular direction. Therefore it’s important to ensure that whatever video users may be watching on their mobiles, it is important to keep it concise, engaging, interactive and unique.

This is especially true in the current generation of ‘Light TV Viewers’, where more and more people are leaving the traditional way of watching television behind and spend more time watching their own preferred types of content whether on social media or on other platforms.

So Facebook has some fairly specific recommendations when it comes to formatting your video adverts. We’ll run through some the most important ones, but you can find the entire list of details here.

Firstly, an important suggestion would be making your videos more immersive by creating a vertical mobile video, offering more space for those who are watching videos with their phone in an upright position. According to statistics garnered by Facebook, vertical videos perform more favourably than horizontal when it comes to viewers’ ad recall. Results have shown vertical (4:5, 2:3 and 9:16) and square videos tend to work best on mobile.

Facebook also recommends you upload the highest resolution video that you have available, now that 4k has successfully emerged onto social media platforms. However, do make sure that whatever the type of resolution you use fits within the file size and ratio limits.

Speaking of which, the possible video length that Facebook allows is between 1 second and 240 seconds, although as we have previously mentioned, the optimal length should be between 5 and 15 seconds. The maximum possible video file size is 4GB.

Make sure to keep all these (and more) in mind when developing a mobile video for Facebook. Other platforms may have slightly altered specifications.

We’ve previously already established that video content has become one of, if not the most preferred type of content for advertisers to convey their message on social media. Video ads are key to grabbing the attention of the average social media user. Bearing all of this information in mind, it can be concluded that advertisers should aim to primarily design their video for mobile viewers as they account for the overwhelming majority of digital video views. Doing so, in the right way, can not only increase your brand awareness but may also result in higher conversion and ad recall rates.

And if you haven’t yet, don’t forget to subscribe to our newsletter in order to stay up to date with our latest content, news, updates and inspirational blogs & whitepapers!