What You Need To Know About Campaign Budget Optimisation

Introduced by Facebook over a year ago, Campaign Budget Optimisation is something considered quite useful by social media advertisers and marketers alike. Find out what it’s about, why it’s become so important and how it can benefit your campaigns in different way by reading the rest of this blog!

What is Campaign Budget Optimisation?

In short, Campaign Budget Optimisation is an option that allows you to control your budget at campaign level.

When you first set up your campaign, this option will be switched off. However, once you’ve activated it, you’ll be able to control and manage the overall daily or lifetime budget for that campaign.

Facebook will optimise your campaign budget in real time on an opportunity-by-opportunity basis. The main objective here is to deliver you as many results as possible with costs that are in accordance with your set bid strategy.

How does it work?

So how does Facebook distribute advertisers’ budgets across ad sets with the aim of achieving the best possible campaign results? Let’s find out. Keep in mind that advertisers can still choose a specific delivery optimisation event for every ad set. Have a look at the image below, provided by Facebook. 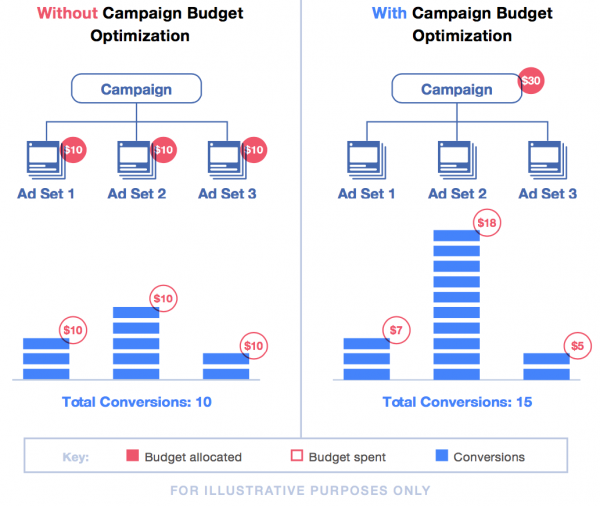 And, as has already been mentioned, you can set bid caps and spend limits for every ad set: desired, non-guaranteed minimum and/or guaranteed maximums. 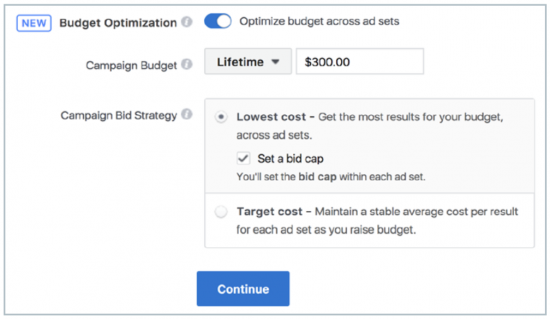 There are several key advantages that come with Automatic Optimisation, so let’s briefly run through them:

Thanks to Automatic Optimisation, more of the budget will be distributed to the ads that perform well, allowing advertisers to maximise and optimise the overall value from their campaign.

Leverage Automatic Optimisation to discover the opportunities with the lowest cost across all ad sets as well as the markets that they end up targeting.

Considering the fact that Automatic Optimisation is an automated process, it will eradicate the need to manually shift and change budgets between different ad sets, saving you significant amounts of time as a result of it.

Should you be in a situation where a certain ad set has a high audience overlap with another one, that budget can then still be spent in another ad set.

Because there will be fewer budgets that you’ll have to monitor and re-allocate during the optimisation period. Furthermore, you will no longer be required to amend or re-calculate budgets whilst the campaign is being run.

Prevent the learning phase from restarting

By activating an Automatic Optimisation, the learning phase won’t be triggered to restart when distributing budget across ad sets, in contrast to when a user manually shifts budgets between ad sets which would end up causing a restart.

Campaign Budget Optimisation on The Next Ad

Furthermore, The Next Ad supports the import of campaigns running with Campaign Budget Optimisation! These campaigns will look identical to any other campaign you’ve either created within The Next Ad or that you have previously imported.

Interested in finding out more about the differences between The Next Ad’s Hyper Optimisation and Campaign Budget Optimisation? Get in touch with a member of our team for all the answers!

So, are you ready to give it a go yourself? We’re ready to help you take your digital campaigns to the next level and beyond! See what it’s like working side-by-side with a Facebook and Google Marketing Partner and get in touch now! No strings attached, no prepayment, just sign up to your 2 week free trial and find out how we can make a difference!

How To Build An Advertising Funnel That Boosts Conversions